1945±5: War and Reconstruction – How Artists Faced the Turbulent Period, at Hiroshima City Museum of Contemporary Art 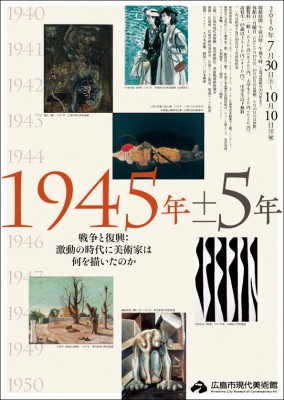 30th July - 10th October, 2016 | Hiroshima City Museum of Contemporary Art
1945±5 is an exhibition that focuses on art in Japan during the five years before and five years after 1945.
These were no doubt the most turbulent ten years in modern Japanese history, with the earlier five years overlapping with the Second Sino-Japanese War (which began in 1937) and the war in the Pacific (starting in 1941), and the later five years seeing Japan’s defeat and subsequent occupation by Allied forces.
During that decade of trauma and tumult, how did artists express themselves, and in what manner did they relate to society?

The war was fought not with military might alone, but by attempting to mobilize all Japan’s people and devote every resource to the war effort. Under these circumstances, artistic activity was strictly controlled, and artists were required to cooperate with military campaigns.
Painters produced war scene paintings or portraits honoring commanding officers.
However, these war paintings contained elements that transcended their genre, and the activities of individual artists were not completely restricted to aiding the war effort.

While swept up in the colossal wave of history, artists remained a diverse group of creative people expressing themselves through various creative actions.

These actions are explored in depth in this exhibition, which presents nearly 200 works, with a particular focus on oil painting.

Email ThisBlogThis!Share to TwitterShare to FacebookShare to Pinterest
ラベル: Art and Design, Hiroshima