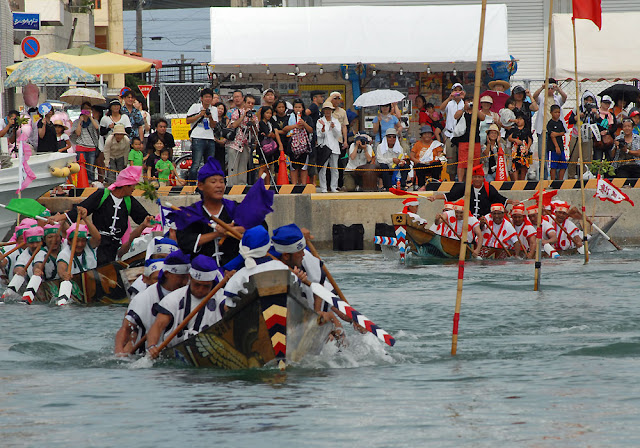 17th June, 2018 | at Itoman Fishery Harbour, Okinawa Pref. Harley gong resounds, and the rainy season of southern country is over - It is beginning of festival of heroic men It is said that the rainy season is over when Harley gong sounds from old days, but we thank blessing of the sea every year in district among Itoman fishing ports in Itoman on May 4 of the old calendar and pray for more big catch and voyage security, and heroic Itoman Harley is performed.
Itoman Harley is the lord of a castle of Tomigusuku in old times (is said to be both 450 years ago and 580 years ago now), and is said that told this ground by event that Ouso Ou that it was King Minamiyama later saw in China, and settle in people local for one of two biggest annual functions of Itoman along with Itoman general rules pull performed now on August 15 in the old calendar, and is grand as festival of the only sea. (*reference: City of Itoman)

# For the details, please access to the followings site;
[Seasonable Traditions & Japanese Culture] http://www.goldenjipangu.com/180612itoman.html
[Official Homepage of the Event]  ››  http://www.city.itoman.lg.jp/kankou-navi/