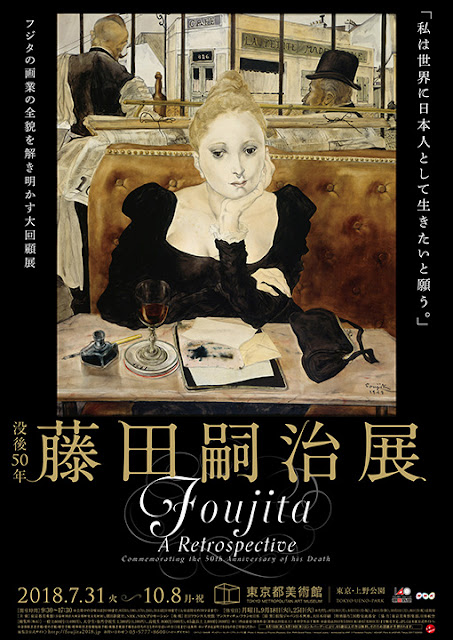 31st July - 8th October, 2018 | Tokyo Metropolitan Art Museum, Ueno-park, Tokyo The painter Léonard Tsuguharu Foujita (1886-1968) was born in Japan in the middle of the Meiji period (1868-1912), but subsequently became a prominent member of the École de Paris (School of Paris), the group of emigré artists who made their home in Paris in the first part of the 20th century.
Foujita spent nearly half of his life (which spanned more than eight decades) in France, eventually acquiring French citizenship and dying in Europe.
This exhibition, organized with the cooperation of museums in Japan, U.S.A, France, and elsewhere in Europe, provides a major retrospective of Foujita’s entire artistic career on the 50th anniversary of his death.
It provides new perspectives and endeavors to capture the essence of his art through a chronological display of major works from each period, organized by genre and including landscapes, portraits, nudes, and religious themes. Among the many highlights are a number of major nudes painted in Foujita’s signature Grand fond blanc (“milky white”). Some of these works have rarely been exhibited in Japan or will be shown here for the first time.

# For the details, please access to the followings site;
[Seasonable Traditions & Japanese Culture] http://www.goldenjipangu.com/180731fjt_art.html
[Official Homepage of the Event]  http://foujita2018.jp/english.html