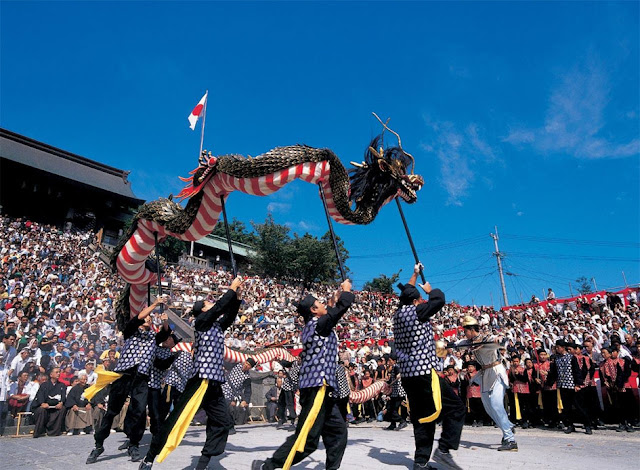 7th - 9th October, 2018 | at Suwa Jinja Shrine, Nagasaki City, Nagasaki Pref.   Started in 1634 as an offering at Suwa Shrine and with over 380 years of history and tradition, the Nagasaki Kunchi Festival is one of three of Japan’s largest festivals of its kind. Listed as an Important Intangible Folk Cultural Property, this large autumn festival hosts 59 separate odoricho, or neighborhood performance groups, that perform once every seven years on rotation. Each odoricho proudly showcases its own unique traditional performance and garb. Among them are performances influenced by China and Holland like the Dragon Dance and Oranda Manzai. Taking place every autumn in Nagasaki, Nagasaki Kunchi is a lively festival with an exotic atmosphere that features the dragon dance, many different dances in colorful costumes, and parade float. ◾Nagasaki Kunchi began in the Edo era, from as far back as 1634, and in that same year, land reclamation of Dejima, one of the Nagasaki's most important tourist locations, began. Dejima was an artificial island originally built for Portuguese residents and acted as the only open window to other countries in Japan after the Dutch East India Company moved there from Hirado. Megane-bashi (Spectacles Bridge), Japan’s first arched stone bridge, was built over Nakashimagawa River during this year as well. ◾Festival Dates: October 7th ~ October 9th Every Year Festival Location: Suwa Shrine, Nagasaki City Auditorium Area, Motofuna-machi, Yasaka Shrine


# For the details, please access to the followings site;
[Seasonable Traditions & Japanese Culture] http://www.goldenjipangu.com/181007nagasaki.html
[Official Homepage of the Event]  http://www.at-nagasaki.jp/foreign/english/kunchi/