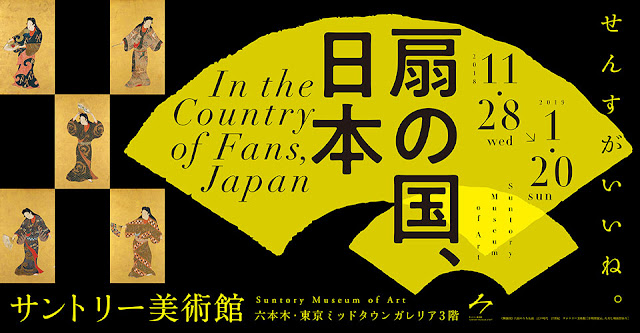 28th November, 2018 - 20th January, 2019 | SUNTORY MUSEUM of ART, Tokyo Midtown Galleria, Akasaka, Minato-ku, Tokyo The ogi or folding fan was invented and developed in Japan. When and how the first folding fan came about is unknown. We do know, however, that by the end of the tenth century, folding fans were being presented to China and the Korean peninsula as tribute goods or special gifts. Chinese documents include new terms devised to differentiate this new type of fan from the conventional flat fan: “folding fan” or “Japanese fan,” for example. As those sources state, the folding fan was a Japanese original.

# For the details, please access to the followings site;
[Seasonable Traditions & Japanese Culture] http://www.goldenjipangu.com/181128sun_art.html
[Official Homepage of the Event]  https://www.suntory.com/sma/exhibition/2018_5/