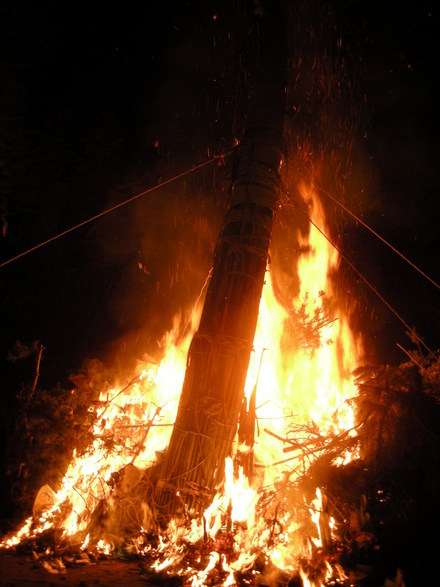 7th January, 2019 | at Karatsu Tenmangu Shrine, Saga Pref.
The 10 meter high, giant pillar of fire brings the perfect state of health.   ～Karatsu Tenmangu Tsuina Festival called "Onja Onja"～
Nearly 400 years ago, Karatsu Tenmangu used to be located in the location of Karatsu Castle and was moved to the present place. Onja Onja Festival has started around that time to get rid off the bad luck and to burn up used kadomatsu, shimenawa, strips and so on. The large Taimatsu is the symbol of Onja Onja Festival. It is 10 meters long and 1 meter in diameter. It was made of bundled bamboos and old trees and wood shavings. About 50 firemen lift it.
After they hold a purification ceremony at 6pm, they cruise around the town for about an hour with 6 small firing Taimatsu(1 meter long), ringing bells and yelling voices like "Onja Onja" to get rid off the devils from the town.
When they come close to the shrine, they set the fire on the large Taimatsu. Then they finally drive the devils into a corner of the shrine and cruise around the sanctuary with the large Taimatsu for three times.
After that, they throw the Taimatsu into the turret, which is filled with old Kadomatsu, used shimenawa etc... In a instant, the flame grows furiously. Next, they pull out the large Taimatsu and let it stand straight. You can hear the sound of cracking bamboo and cheering voices from the audience. The flame grows more than 10 meter high.
It is said that if you touch the flame, you don't get cold for a year. If you placed the ash on the roof of your house, you can avoid being burnt in a fire through the year or prosper in business.
On the festival day, the shrine is filled with many people. The chief priest Yashima, who is in charge of the festival said, "Burn used Shimenawa and Kadomatsu and return them to heaven. Then I hope safety and prosperity of all for the year."

# For the details, please access to the followings site;
[Seasonable Traditions & Japanese Culture] http://www.goldenjipangu.com/190107onja.html
[Official Homepage of the Event]  http://www.karatsu-kankou.jp/