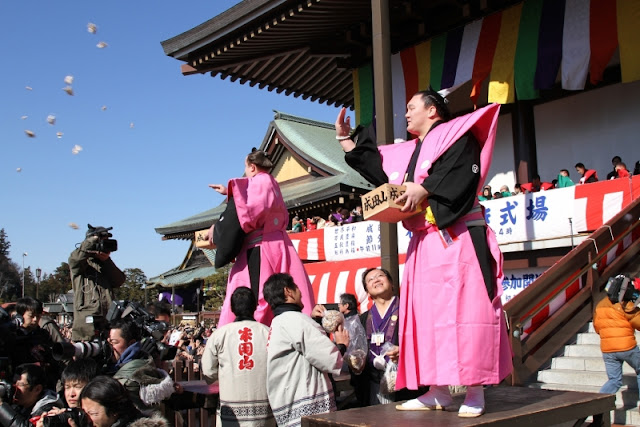 3rd February, 2019 | at Narita-san Shinshoji Temple, Narita, Chiba NARITA, Chiba -- TV celebrities participated in an annual bean-throwing festival at the famous Naritasan Shinshoji temple on Feb. 3 to celebrate "Setsubun," the day before the beginning of spring in Japan. During Setsubun in Japan, people throw beans shouting "Demons out! Luck in!" to celebrate the eve of the first day of spring. The Naritasan Shinshoji temple annually holds a bean-throwing event for the public with celebrities and sumo wrestlers taking part. In Shinshoji temple's bean-throwing event, the participants do not say "Demons out!" and only shout "Luck in!" because the temple's deity is said to be "merciful enough to reform even demons."

# For the details, please access to the followings site;
[Seasonable Traditions & Japanese Culture] http://www.goldenjipangu.com/190203narita.html
[Official Homepage of the Event]  http://www.naritasan.or.jp/gyoji_sp/setsubun-e.html