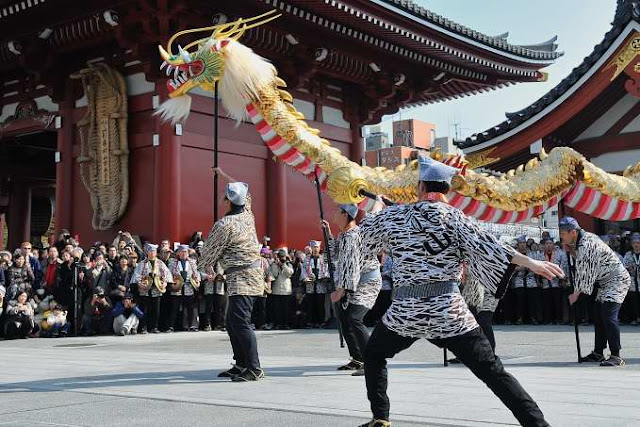 18th March, 2019 | at Asakusa-Kannon, Taito, Tokyo   On March 18 in the year 628 (the 36th year of the reign of Empress Suiko), two fishermen brothers who were catching fish at the Sumida River found a small Buddhist statue. They gave it to Haji no Nakatomo, who realized it was a statue of the bodhisattva Kannon.
He enshrined this statue on a Japanese pagoda tree stump, entered the priesthood, turned his home into a temple, and became deeply religious. This manifestation of the bodhisattva Kannon was the beginning of Sensoji Temple, which is celebrated by the Asakusa Kannon Jigen-e ritual. Sensoji Temple originated from the honorific name "Kinryuzan" (Golden Dragon Mountain).

# For the details, please access to the followings site;
[Seasonable Traditions & Japanese Culture] http://www.goldenjipangu.com/190318jigen.html
[Official Homepage of the Event]  http://www.gotokyo.org/en/