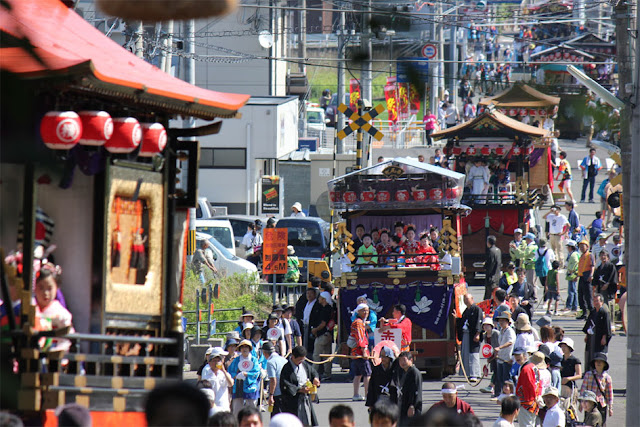 23rd - 26th June, 2019 | Sakichi Shrine in the coastal town of Takahama, Fukui Give evil spirits the heave-ho: Festival-goers send evil spirits into the sea at the Takahama Shichinen festival.
Hundreds of years ago, plagues and other calamities were attributed to evil spirits, which the residents of Wakasa Province in Fukui Prefecture placated with performing arts and a send-off into the sea. The tradition has continued as a series of events taking place around Sakichi Shrine in the coastal town of Takahama. The Takahama Shichinen festival will start after a six-year interval in accordance with the "seven-year cycle" of kazoe-doshi (traditional Japanese method of counting years).
The festivities will include parades of mikoshi (portable shrines) that will first take place, with three groups of strong carriers hauling the shrines around the town until night. On the final day of the festival, the mikoshi carriers will engage in a shoving battle on Toriihama Beach before walking along the water's edge as a finale.
The festival will also hold performances showcasing tachi-furi (sword dances) and taue odori (rice-planting dances), as well as processions of seven hikiyama (floats), all of which will be brought to Sakichi Shrine.

# For the details, please access to the followings site;
[Seasonable Traditions & Japanese Culture] http://www.goldenjipangu.com/190623sici.html
[Official Homepage of the Event]  ››  http://www.town.takahama.fukui.jp/7nenmatsuri/