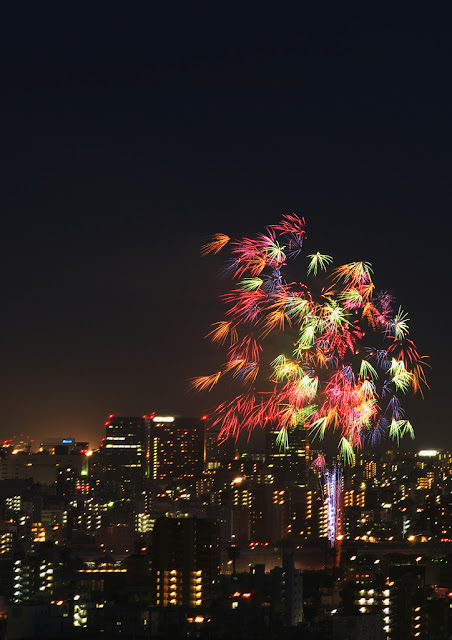 27th July, 2019 | one of the largest fireworks display in Tokyo
Sumidagawa Hanabi Taikai is the largest fireworks display in Tokyo.
Held over the Sumida River in Asakusa, the festival traces its origins back to a festival held to placate river gods after the great famine of 1732, in which nearly 1 million people starved to death. Most of the fireworks explode about 200 meters in the air and produce circular star bursts about 150 meters across.
About 10,000 fireworks are launched from one site near Asakusa Station between 7:30 and 8:30pm. Another 10,000 or so fireworks are launched from another site about a kilometer away near Sakurabashi bridge near Sensoji Temple between 7:10 and 8:30pm. Many Japanese don bathrobe-like yukatas to watch the fireworks.

# For the details, please access to the followings site;
[Seasonable Traditions & Japanese Culture] http://www.goldenjipangu.com/190727sumida.html
[Official Homepage of the Event]  ››  http://www.jnto.go.jp/eng/location/spot/festival/sumidagawahanabi.html