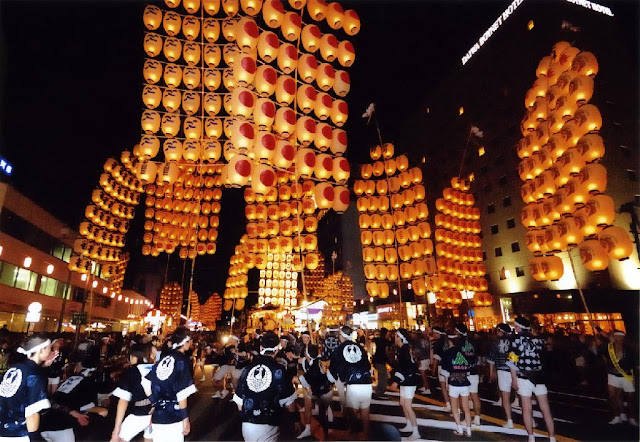 3rd - 6th August, 2019 | in Akita City Kanto Matsuri (Pole of Lanterns Festival) in Akita City is another one of the three great summer festivals of northern Japan. The highlight of this event are the twelve-meter-long bamboo poles holding 40 to 50 candle-lit paper lanterns and weighing to 50 kilograms carried by individuals who do fancy steps as they balance the lanterns on their foreheads, shoulders, chins and hips. The origin of the festival is not known. Designed to bring good harvests, it has been held for at least 250 years and most likely evolved from efforts by local farmers to exorcize "sleeping demons" believed to bring disease and misfortune. The festival began taking its present shape in the early 19th century when candles became more widely available.

# For the details, please access to the followings site;
[Seasonable Traditions & Japanese Culture] http://www.goldenjipangu.com/190803akita.html
[Official Homepage of the Event]  ››  http://www.kantou.gr.jp/index.htm