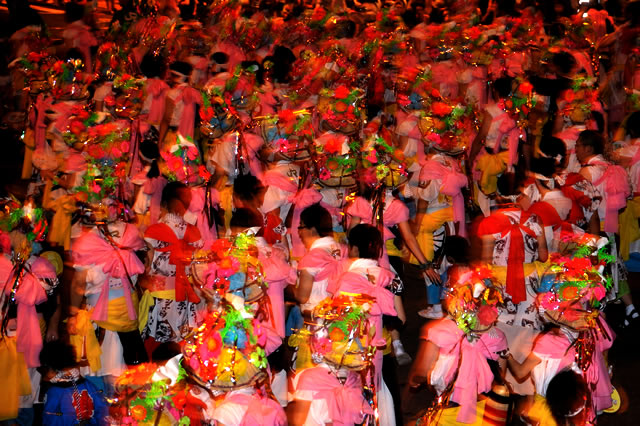 2nd - 7th August, 2019 | Aomori Prefecture
Nebuta Matsuri is one of the three great summer festivals of northern Japan. In the towns of Aomori and Hirosaki huge lit-up, paper-mache figures (nebuta) are pulled on floats through the streets at night.
The celebration is believed to have inspired by the ritual of floating paper lanterns down rivers during the Tanabata Festival on July 7th. The huge floats carry the images if historical figures and mythological creatures.
The largest ones are nine meters wide, seven meters long and five meters tall and weigh four tons. They are made on wheeled chassis and take local artisans around three months to complete About 20 floats, illuminated from the inside, are paraded each day of the festival along the 2.3-kilometer parade route. They are maneuvered by teams operating poles attached to the sides of the floats and directed by sensumochi (fan wavers). Each float is followed by a troupe of dancers made up of local people and tourists.
Clad in cotton kimonos and floral headgear, they dance and revel to traditional music made by drummers, pipers and cymbal players. The festival ends with a fireworks display at Aomori Port and the carrying of floats into the water, with particular attention given to the top three prizewinners.

# For the details, please access to the followings site;
[Seasonable Traditions & Japanese Culture] http://www.goldenjipangu.com/190802nebuta.html
[Official Homepage of the Event]  ››  http://www.nebuta.or.jp/